Culture Makers for a Climate-Just Future

Creativity for climate change. Solmaz Maryani, Edoardo Delille and Giulia Piermartiri (live streaming from Mozambique) in conversation with Veronica Nicolardi (Director of Cortona On The Move).

Cortona On The Move x CultureCOP

In February 2022, the latest report by the Intergovernmental Panel on Climate Change (IPCC) highlighted how the impacts of climate change are devastating our Planet, with dramatic consequences for the people who inhabit it: us. “This report is a dire warning about the consequences of inaction,” said Hoesung Lee, chair of the IPCC. “It shows that climate change is a serious and growing threat to our well-being and to the health of our planet. Our actions today determine how people adapt and how nature responds to the growing risks associated with climate change.” The latest Oct. 26 report from the UNFCCC, the UN climate agency on emissions targets, shows that even if commitments on cutting greenhouse gas emissions are made so far by countries around the world, the planet’s temperature will rise by 2.5°C by the end of the century.

It is time for action.

Change is happening. Dangerous and widespread disruptions in nature are already evident: droughts and desertification, warmer and rising oceans, frequent and intense flooding are causing food shortages, health risks, species extinction, poverty, displacement, food and water insecurity especially in Africa, Asia, Central and South America, on small islands and in the Arctic.
It is the people and ecosystems with the least ability to cope that are most affected by climate change, which will inevitably lead to the alteration of the already precarious global socio-economic balance, increasing inequalities across our society. CultureCOP is a global movement of culture makers united by their shared vision of a sustainable future. It was created to complement, inspire and influence COP27, the United Nations Climate Change Conference that, this year, will be held in Sharm el-Sheikh from Nov. 6-18.

CultureCOP’s mission is to work for climate justice as a means to interconnect the challenges we face, to co-create solutions that will not only help us solve these challenges, but will also serve to build a more just and equitable world for all its inhabitants. CultureCOP is committed to rebalancing historic inequities and asymmetries of power to create a future in which all can have the resources to thrive, and to giving centrality to the voices of indigenous peoples and the global South, to lead the world toward a just relationship with ourselves, each other and our environment.

The international photography festival Cortona On The Move has partnered with CultureCOP to become a promoter of sharing and spreading culture as a tool for knowledge, exchange and growth. Culture, and particularly photography as the most widespread and understandable medium, must play a central role in representing the present and future of climate change and its impact on geography and society. This was the case, for example, in recent times with accounts of severe drought in Italy and Europe.

In conjunction with the events organized by CultureCOP in the desert of Dahab (Egypt) and in line with COP27, from November 10 to 13 Cortona On The Move creates in downtown Paris a narrative space for reflection and dialogue about the world we live in, to bring the urgent and dramatic issue of climate change to the attention of other culture makers, photography enthusiasts, collectors and industry experts who will be attending the international Paris Photo fair in the French capital.

The goal is to bring about new awareness and the necessary cultural transformation that lays the foundations for global action, to achieve a future of climate and social justice, identifying authorial and documentary photography as a tool to give climate change and its effects prominence and, at the same time, raise awareness among a cross-section of users.

Cortona On The Move presents two projects with different views on our present times, in line with its mission: the constant search for original and innovative narratives and new perspectives and visions on the world we live in.

Culture is synonymous with collective engagement, for a future shaped by climate justice.

Requiem for Our Future

How do you photograph the future? How do you photograph it when it is not some science fiction fantasy but a dystopic reality behind the corner? In this exhibition that Cortona On The Move in partnership with CultureCOP on the occasion of COP27 and of Paris Photo we decided to exhibit two projects we feel demonstrate how photography can be a powerful tool not only to show the immediate effects of the wreckage we have brought on our unique planet but also how it can measure, compare, put in prospective, and ultimately imagine and maybe even predict the future.

In Solmaz Daryani’s aptly named work “The Eyes Of Earth” she leads us by the hand into an intimate family story intertwined with an ecological disaster. For generations Solmaz’s family has lived and thrived on the shores of Lake Urmia in Iran. The lake was the second largest salt lake on the planet. However, as she states “the lake has lost 88% of its area since 1972 due to diversion of the freshwater flowing into the lake.”
This story we know all too well, is destined to be repeated dozens of times again across the globe and one of the strengths of Solmaz’s work is to show us that the consequences are not only ecological but emotional as well. She predicts our future looking at the past. Indeed, a collection of touching photos from her family album that revolve around the lake and its role in their shared memories are than contraposed to the images of the lake the way it is today. But the contemporary images do not give in to ecological alarmism but are rather a melancholic reflection on what we are capable of and the toll of this on our identities. A requiem for our future.

Edoardo Dellille and Giulia Piermartiri’s share with us “Diving Maldives”, the first chapter of an ambitious project where they put to test the typical notion that photography freezes the present and actually bend the medium in a way that they make it tell the future. And for this they use projection, a word that refers to both a typical photographic process but as well to what we imagine the future will be. These are not images generated by some software or some kind of double exposure. These are testimonies of a moment that has really accrued when Edo and Giulia used a high-powered projection device to shine a light on daily life in villages where only locals live in the Maldives. But the light is actually the projection of a slide of underwater images taken by the oblivious tourist trying to secure a vacation memory.
The result are eerie photographs, ecstatically complex and oneiric that show us what is awaiting us. Again, these photographs do not abide to the spectacularizing and dramatization of global warming but rather show us how art is fundamental not only to see the world but also to imagine it.

Artistic Director Cortona On The Move

The Maldives islands – well known for the beaches of their exclusive resorts and for the underwater activities of tourists – have a height of 1.5 meters above sea level, and this makes it the lowest country in the world. According to the United Nations, the Maldivian islands will be the first State in the world to disappear as a result of climate change.
In “Diving Maldives”, Giulia Piermartiri and Edoardo Delille have collected a series of underwater photos taken by tourists and they have projected them as slides. So the houses and the streets became the cloth on which it was projected a metaphorical projection of a not too distant future that looms over the daily lives of the islands’ inhabitants.

Giulia Piermartiri (1990, Porto Sant’Elpidio, Fermo, Italy) and Edoardo Delille (1974, Florence, Italy) are a couple of photographers who collaborate on stories that they produce together. After investigating the Southern border of the United States, they decided to focus on the upcoming developments of climate change. 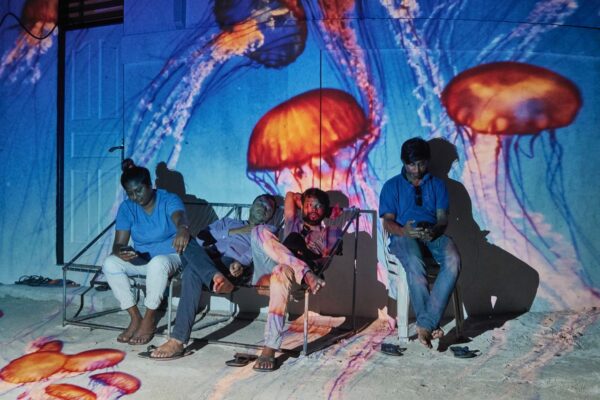 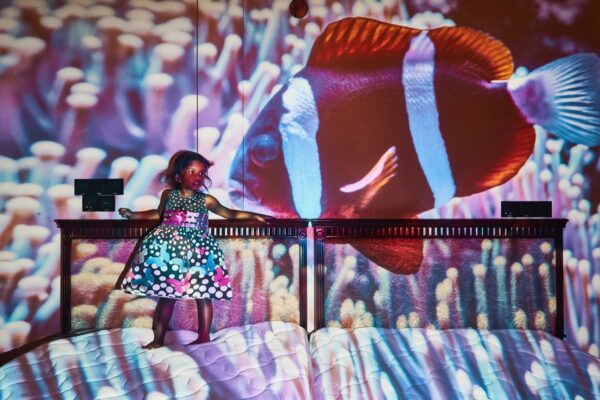 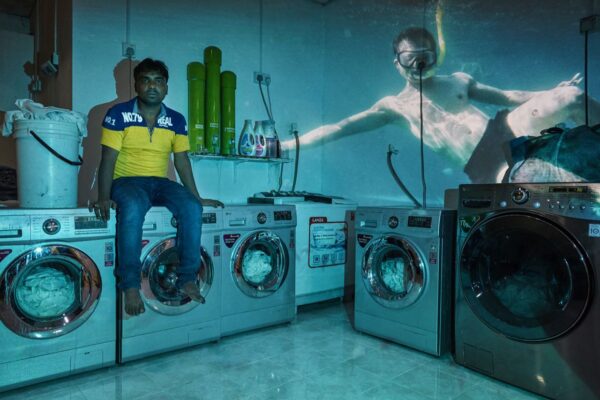 THE EYES OF EARTH

I grew up beside Lake Urmia, in Iran, which was the largest lake in the Middle East. Once a thriving tourist destination, the lake provided a livelihood to countless people, including my mother’s family. Since 1972, it has lost 88% of its area and 80% of its volume due to diversion of the freshwater. Local tourism and agriculture have progressively been affected by the drying up of the lake. The consequences of this environmental catastrophe have triggered a coordinated effort to save Lake Urmia, but there is still a long way to go for the lake.
In this long-term ongoing personal-environmental story I tried to demonstrate the impacts of the drying of Urmia Lake on my own family, ecosystem and people living around it to reflect the interconnectedness of humans and the environment. The vanishing of Lake Urmia is much more than an environmental hazard; it is an emotional wound in people’s memory.

Solmaz Daryani (1989, Tabriz, Iran) is a documentary photographer loosely based between Iran and the UK. Her work is focused on the climate change, water crisis, on humans and their relationships with the environment, communities and cultures. 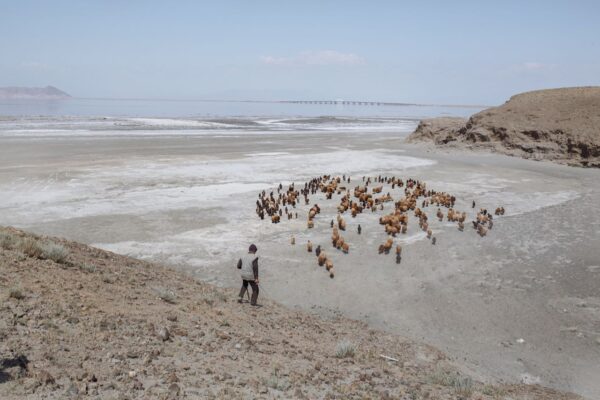 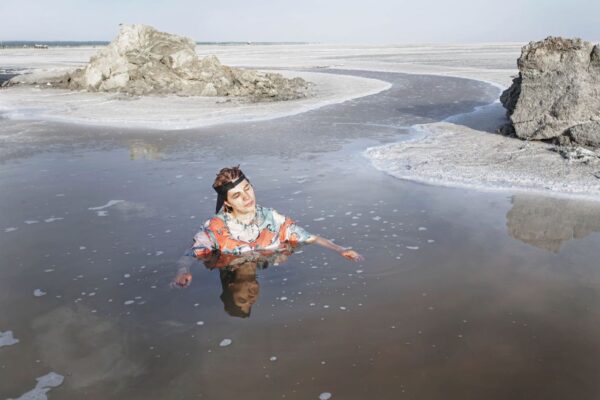 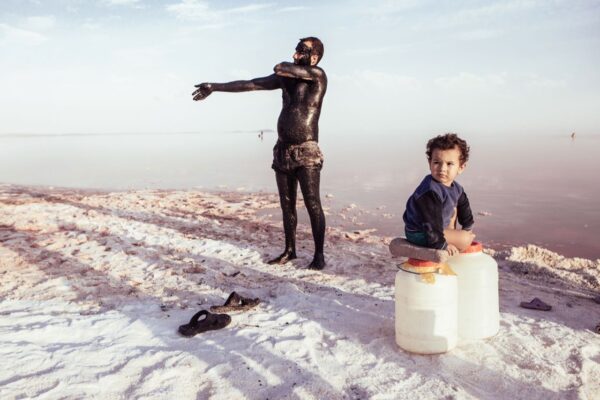